The story of Yes Bank is one which will be remembered by the investors, the bankers and especially the account holders for what it transpired to. It not only revealed the flaws in the banking system of our country, but it also has made the general public vary of the notion that the money in the banks is safe. To understand the entire situation, let us start from the very beginning of the unfortunate tale.

2004: Yes bank was founded by Rana Kapoor and Ashok Kapur. While the former was the chairman of the company, the latter was the MD and CEO, looking after the day to day operations.

2008- Unfortunately, during the 26/11 attacks on Mumbai, Ashok Kapur was at the Trident Hotel and didn’t survive the attack.

2012- Rana Kapoor published a brief history of Yes Bank, in which no reference was made to the late co-founder, Ashok Kapur. This created certain animosity between Rana Kapoor and the surviving family of Ashok Kapur.

2015- It was held that Rana Kapoor and Madhu Kapur have joint right to appoint the nominees for the Board of Directors for the bank. Any appointment made by Rana Kapoor without the consent of Madhu Kapur was held ultra vires and hence invalid. However, being the family of the co-founder did not automatically lend them a position on the board of the bank.

Though these incidents are strictly not related to the latest mishap, it is worthwhile to note the series of incidents that led to it.

September 2018- RBI asked Yes Bank to end Rana Kapoor’s tenure as the Managing Director and CEO by 31st January 2019. Earlier, the bank had a 3-year extension till 31st August 2021. The RBI declined the request and asked the bank to come up with a succession plan. The RBI had become very critical of the functioning of the bank under Rana Kapoor. RBI had observed persistent governance and compliance failure, which was reflected by the bank’s highly irregular credit management practices.

November 2018- Moody’s Investors downgraded the rating for Yes Bank, citing the resignation of Board of Directors, RBI’s directive to restrict the term of Rana Kapoor and corporate governance issues of the bank. The bank had seen resignation from three directors, with reasons that they were unhappy with certain developments. Following this, ICRA also downgraded the ratings for the bank.

January 2019- The bank appoints the head of Deutsche Bank India Ravneet Gill as its new CEO.

April 2019- The bank reported a first-ever quarterly loss. The quantum of the loss was ~INR 1,507 crores, while the provisions had increased by nine folds. Responding to the results, Macquarie double downgraded the credit rating for the bank. Consequently, the stock declined by ~30%.

May 2019- RBI appointed former deputy governor Rama Subramaniam Gandhi as an additional director on the board for a period of two years. Under the Banking Regulation Act, 1949, the RBI can appoint an additional director if it is an opinion that it is necessary for public, depositors or bank’s interests. This was an indication of tightening of RBI’s grip on the daily working of the bank.

July 2019- The results continued to deteriorate for the bank, as it reported a 91% drop in the quarterly results for Q1FY20.

January 2020- The bank rejected the USD 1.2 billion investment proposal and said that now it was looking to raise funds through a qualified institutional placement in one or more tranches.

March 2020- On 5th March 202, the RBI imposed a moratorium on the Yes Bank and capped the withdrawals at INR 50,000. The entire board of the bank was suspended on the same day. Former SBI CFO Prashant Kumar was appointed as administrator for Yes Bank. The moratorium period is to last for 30 days, during which a reconstruction or amalgamation will be attempted to rescue the bank.

Amidst the chaos, SBI has emerged as the lead bank to invest in the capital-starved company. SBI to invest INR 2,450 crores in the bank, by acquiring 245 crore shares at INR 10 each. The market price of the share as at the close of 6th March 2020 was INR 16.60 per share. This will give SBI a 49% stake in the bank.

What I have missed out mentioning till now is where it all went wrong. It was often said in the market that if no one will lend you money,  Rana Kapoor certainly will. The former CEO of the bank made some aggressive and rash decisions by providing advances to large corporate borrowers who were struggling financially. Yes Bank was the key lender to corporates such as IL&FS, Dewan Housing, Jet Airways, Cox & Kings and CG Power, who all ran into financial troubles. It is said that Kapoor lent to these borrowers and took an upfront fee in return, which boosted the profits of the bank for the earlier years. However, as these troubles, borrowers failed to repay their dues and this caused higher NPAs and provisions for the bank, which resulted in poor performance in the later results. In short, Kapoor took long term risks for short term financial gains, which didn’t really pay off.

In the latest turn of events, Rana Kapoor was arrested by the Enforcement Directorate under the provision of the Prevention of Money Laundering Act (PMLA). He was already under the probe for allegedly receiving INR 600 crore from DHFL in exchange of the bankrupt company not repaying its loans.

As the rabbit hole of Yes Bank goes deeper, yet to be uncovered, it remains fascinating how aggressive approach of one person shook the entire banking system, forced the central bank to intervene, largest public sector bank to come to the rescue and deter the confidence of the general public in the Banking System of the country, especially in a period where the government is aiming towards a cashless economy. 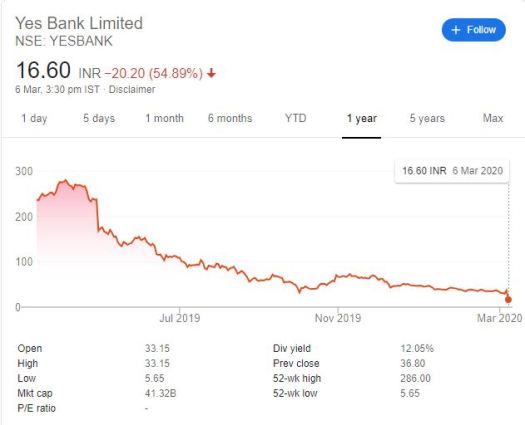