Ever since its recent spurge, the world has been abuzz with the possibilities and risks revolving around the latest fad among the investors, the Bitcoins. Bitcoins saw a huge spike in their prices, with more and more people wishing that they had invested in the cryptocurrency earlier. But it raises many questions altogether, and today we will try and walk through many of such questions, without venturing into technical details.

Q- What are Digital Currencies and Cryptocurrencies?

A- In layman’s terms, digital currencies are a form of money which exist in digital form, instead of the physical form such as coins and paper notes.
Cryptocurrencies are are a subset of digital currency, designed as a medium of exchange that uses cryptography to secure its transactions, to control the creation of additional units, and to verify the transfer of assets.

Q- What are Bitcoins?

A- Bitcoins are a form of a cryptocurrency which is the world’s first decentralized digital currency i.e. it operates without a central bank or single administrator.

A- Bitcoins have been developed by an unknown person or a group of people that go by the alias of Satoshi Nakamoto.

Q- What was the intent behind creating Bitcoins?

A- Bitcoins were released as an open source software in 2009 by alias Satoshi Nakamoto. Bitcoins were originally created as a reward for a process known as mining. They can be exchanged for other currencies, products and services through vendors who accept Bitcoin as payment methods.
They were developed in the wake of 2008 Global Financial Crisis as such currencies are immune from such events.
One of the earliest recorded Bitcoin transaction occurred in 2010 as 10,000 Bitcoins were used to purchase two pizzas delivered by Papa John’s

Q- How does the mechanism of Bitcoins work?

A- Since their origin, the only way of bringing about new Bitcoins are by the way of giving them as rewards for mining. The miners are required to find a number called a nonce, such that when the block (group of transactions) content is hashed along with the nonce, the result is numerically smaller than the network’s difficulty target. The successful miner finding the new block is rewarded with newly created Bitcoin. As on 1st March 2015, the average number of nonces miners had to try before creating a new block was 200.5 quintillion.
This mechanism ensures that there are an only finite amount of Bitcoins in the circulation as generating Bitcoins require mining which is a difficult as well as time-consuming task.
The ownership of Bitcoins is determined using a private key used in combination with the public key. If someone loses the possession of the private key, there is no way to recover the key or the Bitcoins corresponding to such key.
At inception, the creator of Bitcoins had devised a policy which would restrict the number of Bitcoins to the maximum of 21 million.

Q- How does Bitcoin differ from real money?

A- The main difference between Bitcoins and real money is that real money operates in a regulated environment and is backed up by a central authority. For example, the Indian Rupee is backed up by the Reserve Bank of India. RBI also controls the value of rupee w.r.t other currencies such as USD to keep it under check.
It is due to the absence of such regulations and authority that the Bitcoins are so so volatile and operate solely on the forces of demand and supply. This has made them a potential investment opportunity for investors and speculators with high-risk appetite.

.Q- What has been the value history of Bitcoins? 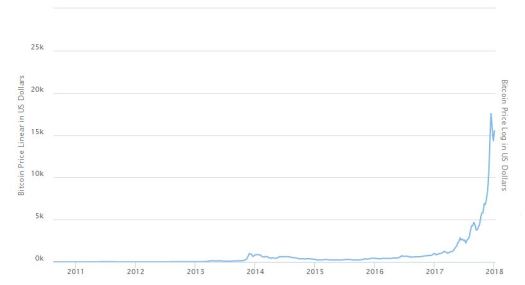 Q- Why there has been a sudden rise in the value of bitcoin?

A- It’s hard to pinpoint where the value of Bitcoins lie. So it is safe to assume that the value of Bitcoin is derived entirely by the forces of its demand and supply in the market. Hence we can infer that the value of Bitcoins has risen due to its exponential increase in demand in the market. As it is evident, there has been an increase in awareness about the concept of cryptocurrencies and hence the rise in demand was to follow it.
The fact that there were various ransomware attacks in 2017 with hackers demanding ransom in Bitcoins contributed to a rise in awareness of the existence of bitcoins.
Also, there has been an increase in demand mainly due to lack of external regulations which can ensure its value retention in events such as the 2008 Global Financial Crisis.
Further, Bitcoins employ dual cryptography which ensures that the generation and transactions are secure and further that there are always a finite amount of Bitcoins in circulation.
Further, what may have contributed to the rally in 2017 is the launch of Bitcoin Futures by the CME group.

Q- Are Bitcoins legal in India?

A- To answer in one word- Yes.
There is currently no law, Act or any provision in any Act to render cryptocurrencies such as Bitcoins illegal. In absence of such law, it can be safely assumed that the Bitcoins are legal in India.
However, it should be noted that RBI has issued three press releases cautioning the users of virtual currencies on Dec 24, 2013, Feb 01, 2017 and the latest one being on Dec 05, 2017.

Q- How to buy and sell Bitcoins in India?

A- There are various brokers who offer to act as intermediaries between prospective buyers and sellers of Bitcoins in India and charge commission through the difference in buying and selling prices.

Q- How to utilise Bitcoins?

A- Apart from being exchanged for rupee through the above-mentioned intermediaries, Bitcoins can be used for payments to various global merchants who accept Bitcoins as payment. They are popular among dark web as they cannot be traced due to a high level of encryption and absence of regulation.

Q- The big question- Should we invest in Bitcoins?

A- There can never be a single undisputed answer to this question. All we can see from the trend is that overall Bitcoins have exhibited extreme volatility with the currency rising exponentially in the year 2017. Many economists have called it a bubble and expect it to burst soon. However, many experts have called it a secure medium and have disregarded the falls as mere corrections in the price which can be observed in every market.
So yes there will never be a single opinion on this issue. At the best, we can conclude that those who prefer safe investments should avoid investments in Bitcoins. For those who are ready to bear the risk for high return expectations, be your own judge.

If you have any more of such queries, please comment them below and I will try my level best to answer them. Suggestions are always welcomed.